Our flagship shoe is turning 50! 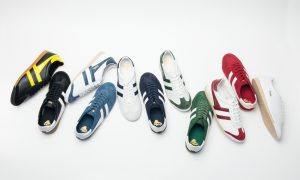 Happy birthday Harrier, you have been a long and trusty friend to our wardrobe. To celebrate Harrier turning 50, we’ve taken the silhouette back to where it all began; using classic colourways from when Harrier first burst onto the sport shoe scene but with clever modern updates, this collection is everything you need this summer.

Back in 1968, Harrier was the multi-purpose training shoe of choice. Built for track and field, the gym or the pitch, Harrier led the way in sports footwear. Originally launched in statement making white/red, this colourway was soon partnered with royal blue/white as a fellow option but as the years have progressed Harrier’s colour options have run into the hundreds. Never shy of making a statement the original design featured a durable gristle rubber sole, suede toe cap, rubber toe guard, padded insole and of course the signatory contrast Gola wingflash branding.

As Harrier moved into the ‘70s it developed a new life in the form of a leisure shoe. This multi-purpose training shoe was now equally at home on the track as it was on football terraces up and down the UK. From here Harrier transcended into music culture, with a cult following from key names of the day such as The Jam. Over the decades other fans of Harrier included Duran Duran, Oasis, Robbie Williams, Jude Law and Paul Weller. For Harrier’s 50th anniversary we have seen the son’s and daughters of rock royalty wear these styles with as much style as the first time around. Raff Law (son of Jude law) and Anais Gallagher (daughter of Noel Gallagher) are two of the names sporting the new Harrier style. Never steering far from its original form, Harrier has stood the test of fashion cycles and footwear fads to have survived five decades and be Gola’s best selling footwear style. In recognition of this accolade, Gola has launched a special edition anniversary edit of Harrier. With the design staying true to the style’s 1968 roots, the special edition is a no gimmick, purist silhouette; it’s confident, genuine and unique. There’s only one Harrier.