Everyday Analysis is a ten month old collective project that is creating quite a stir online and in literary circles. Set up on the 14th January 2013 and edited by Alfie Bown and Daniel Bristow, the collective consists of an anonymous group of 10-15 contributors from the worlds of academia, the media and unemployment, who analyse aspects of everyday life; from toys, adverts, drinking games, autocorrect fails, bumping into people in the street and the ‘Would You Rather’ game, to slang, Zombies and Coke Zero: everything. They take a philosophical and theoretical idea and show how it can be demonstrated in one of these everyday things, and at the same time, show how everyday things can ask new questions of philosophy. The collective have attracted the attention of publisher Zero Books and have a book coming out in the New Year entitled ‘Why Are Animals Funny?’

Along with their blog, Everyday Analysis have a regular column in The Mancunion newspaper and have also been featured in the Huffington Post. Find out more and engage with their work on their website http://www.everydayanalysis.com/, on Facebook and Twitter. Copies of their book will also be available from Zero Books,  and leading booksellers like Amazon and Waterstones after Christmas.

What does Everyday Analysis do?

We’re trying to change the idea that critical theory and philosophy is an intimidating or ‘ivory tower’ thing that doesn’t affect many people or interest many people. We want to encourage new ways of thinking about the everyday and theory helps do that. Philosophy has got more to do with Google than it does with Alain de Botton.

Why are the contributors anonymous?

We see the group as a collection of different voices working in the same broad direction. The anonymity is a move away from the idea that one should feel that they’re reading a particular author’s particular view. It’s not about particular interpretations but about opening up existing ways of thinking.  Anonymity opens up possibilities for writers, who can then write from different perspectives and experiment with style etc.

How did Everyday Analysis come to be published?

Dan and I thought it would take years to gradually build up a base of people interested in and reading Everyday Analysis, but it’s all taken off quite quickly. We’ve got our book coming out which we thought would only come about 4 years down the line! On Twitter, we met some people who worked for the publisher, Zero, and writers who had been published by them before, who were enjoying and following the blog. Off the back of that feedback, we contacted Zero about the possibility of a book being published. It’s very exciting because they’re unique in that they’re interested in publishing young people’s first material and are the only publisher who publish theoretical and philosophical work and try to get it out to a wider audience for a decent price, which is perfect for us.

What can we expect from ‘Why Are Animals Funny?’

We’ve picked our favourite 46 separate analyses from the last six months on the blog, ‘Why Are Animals Funny?’ being one of them. The contributions are quite informal and journalistically written because we want to show that complex theory can be accessible and funny, for example we have articles on Bruce Willis wearing a dressing gown on Daybreak, jokes, internet memes and animals. What we write is fun and enjoyable but also aims to think about serious philosophical concepts in new ways, without simplifying them.

What’s next for Everyday Analysis?

We’ve proposed releasing volume II, which we hope Zero will be on board with again. It’ll be the same sort of thing: the best of the next 6 months’ analyses on the blog. Volume III is going to be quite different though, because the collective are going to collaborate on a book which will be a specific study of popular culture. It’ll be a more coherent book with chapters, not a collection of blog posts. So we do have a few things planned for the future: everyone involved really enjoys Everyday Analysis and we’ve been so surprised and pleased by the number of people reading and interested in it, and we didn’t expect it to be so immediately successful at all. It’s something we really believe in and we’re delighted with its reception so far and want to continue with it for as long as possible. 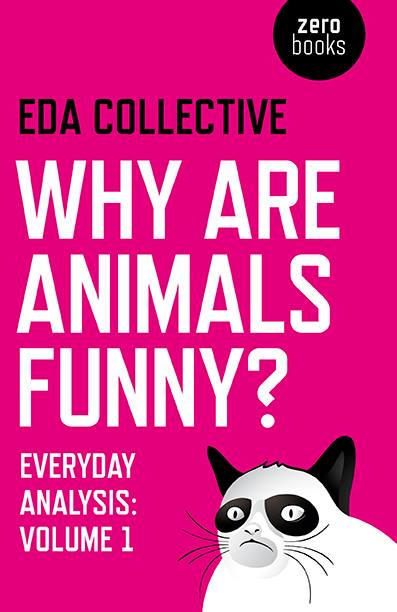