Do you like funk? Do you like jazz? Do you like hip-hop? If you answered yes to any of these questions, well get ready, because your mind is about to be well and truly blown.

Formed in Sheffield back in 2009, and comprising of eight horns, two percussionists, a scratch DJ and a live MC, the Renegade Brass Band are quite simply a tour-de-force of funk and soul. With a incredible live reputation preceding them, and a whole host of hi-profile festivals and support slots under their belts, it is safe to say that this twelve-piece are currently creating some sizeable waves in the industry. Named by the Sheffield’s premier dubstep and hip-hop night the Tuesday Club as one of their top live acts, and having recently played the Craig Charles Funk & Soul Show live in Manchester, it cannot be long before they explode completely.

Keep your eyes peeled for new material coming shortly, as well a whole host of live shows. For more information (and of course more tracks), check out the Renegade Brass Band website and Facebook page.

Katie Soze specialises in transforming everyday images into extraordinary artwork. Having graduated from Huddersfield University with a degree in Fashion Design and now based in Sheffield, she has expanded her interests into the field of illustration and photography, capturing scenes of everyday magic in her own unique and visually breathtaking way.

Her latest project has been two years in the making, involving her photographing snippets of her everyday life. From walking home from work to taking trips to the laundrette, she believes art is to be found all around us, saying that “you never know what is waiting for you just around the corner.” In the past, she has experimented with a variety of different styles and forms, and more recently has been working on a project which, inspired by a dislike of the misleading term “plus-size model”, she has dubbed “fat naked photos”. You can find the images, as well her interesting personal take on life-modelling on her Tumblr site.

Katie’s work has the air of something fresh and exciting because she appears to use every excuse to experiment with her medium, developing projects by first playing around with ideas. She doesn’t seem scared of adventure, making her work varied and interesting, always innovative and with her style constantly evolving. 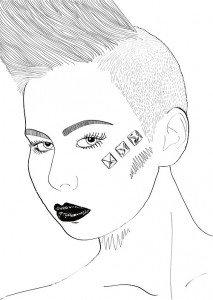 You can currently see some of Katie’s latest work exhibited at the Urban Outfitters store in Meadowhall, Sheffield in conjunction with Moonko, where you can also get your hands on some of her beautiful prints.

James Green is a man of many talents. Not only is he the front-man of Sheffield-based folk ensemble Big Eyes Family Players, but he’s also an extremely talented print artist, and it’s his art that I want to tell you all about.

Despite studying Fine Art as part of his degree, James only started making prints a few years ago, when he found some old lino and cutting tools and decided to give the whole printing thing a whirl. Since then, he’s been producing his lovely prints for sale and various art projects and workshops around Sheffield.

Working mainly in lino-cut (which basically means transferring his drawing to a piece of lino, cutting out the white space and printing the resulting image either by hand or with a press), James’ prints have a simple and direct quality that makes them very appealing, using just two or three colours to create extremely striking images. Because he only has so much control over which way the ink decides to go, the prints also have an unpredictable air, with every one differing form the next. Nature is one of his more popular themes, as are cityscapes and all are clearly produced with the same delicate care and attention.

As well as his prints (which he also produces as posters and greeting cards) James has also created artwork for record sleeves, including albums by James Yorkston, Farina and Circle Records and in 2008 was commissioned by Paul Smith Menswear to create two t-shirt designs for sale in their Japanese stores.

To find out more about James’ work and his latest projects, please visit his blog. You can buy his work via his store on Folksy