I got to see the 40/40 show, which was held in celebration of the 40 year anniversary of Glasgow Print Studio, just before it ended. For a print geek like myself, it offered the opportunity to be wowed by 40 Scottish artists, and their many styles and techniques. The 40 pieces commissioned by the Glasgow Print Studio for the show were also for sale. I couldn’t afford most of them on my student’s budget, but if I had to pick one to splurge on, it would probably have been a print by Bronwen Sleigh.

Sleigh received her MA in Printmaking from the Royal College of Art in 2008. Her current work consists mostly of elegant geometrical abstracts that are striking at a distance. Up close is where they truly shine, due to the detail and precision Sleigh’s chosen process of etching allows for. Etching is a complex and labor intensive printing process that involves using chemicals to dissolve the lines forming a desired image into a metal plate. Historically, it has been used for centuries to create some of the most famous works in printmaking. The difficulty of etching is a fair tradeoff for the sharpness and detail the metal plate allows, however, and Sleigh makes full use of this quality.

Sleigh uses architecture as a starting point for her compositions, and titles like Pacific Quay, Westfield Road and Exhibition Way II reveal the inspiration for the prints, but they are still essentially abstract. To me, they feel like exploded blueprints, or a representation of what it is like to move around and through these architectural spaces. Sleigh’s work is already beginning to gain international appreciation, as she is featured in shows from Canada to Japan, and her work is in major collections such as the V&A. If you’d like to see more of her work, check out her website!

Aliyah Hussain graduated from Manchester Metropolitan University with first class honors in Interactive Arts.In 2009 she received the Google Photography Award, exhibiting at the Saatchi Gallery in London. Her projects include costume designs, video installations and cross discipline collaborations. She confidently works between the fields of printmaking, performance and photography to name a few. She blends together traditional and contemporary, everyday objects and imaginary visions.

Gouache painted on top of a photograph represent a successful combination of opposite mediums in an artwork. Painted geometrical forms create distorted perspective, where figures become almost architectural models, transforming landscape captured in the photograph into an artificial scenery.

Her works merge intricate detailing with free painterly approach. She creates vibrant and elegant drawings of imagined flying machines, kites and satellites, or a flattened out carousel. Aliyah finds aesthetics in technology, converting technical drawings into visions of futuristic machines.

Collaboration is also a big part of her work. She is a member of the collective Volkov Commanders, “a group of artists who devised a unified alter ego to create collaborative sculptural and performance works that explore the boundaries between visual art, dance and costume.”

To see more of her works, visit her website www.aliyahhussain.co.uk and www.volkovcommanders.co.uk/

A combination of art and philosophy that questions the traditional representation of human personality has found a new contemporary resolution in Chloe Gough’s works. Chloe is an artist based in Scotland, who graduated from Duncan of Jordanstone in Fine art, Philosophy and Contemporary Practices in 2009. Since then she studied at the SMFA, Boston and University of Michigan for her Masters of Fine Art.

Her accomplishments include the Donald Dewer Arts Award, David and June Gordon Memorial Trust Award and The Royal Infirmary of Edinburgh Purchase Prize. 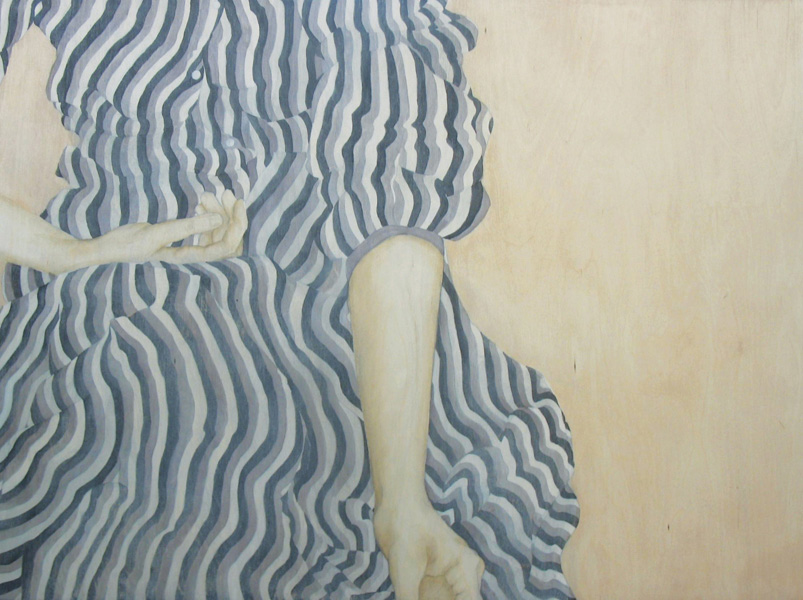 Chloe looks at human figures, their poses, language and characteristics, merging traditional portraiture methods with philosophical context and theory.Her artworks emphasize the importance of body language and details in physical appearance that can easily stay unnoticed. Not giving the face to the viewer, she creates an increased awareness of human gestures, poses and physical expressions.

“By removing the gaze and also perhaps the face, I hope to draw more attention to the details present in posture, pose and physical quirks that appear in a person’s stance,” says Chloe. Using a variety of mediums, primarily painting and printmaking techniques, she reinvents traditional approaches in portraiture, accentuating another physical aspect of human personality.

Her artworks display careful observation of people. She creates portraits by replacing facial features with objects, attempting to find individuality through material representation and to perceive a person as a combination of tangible objects.

To find out more, visit this page http://www.chloegough.net/