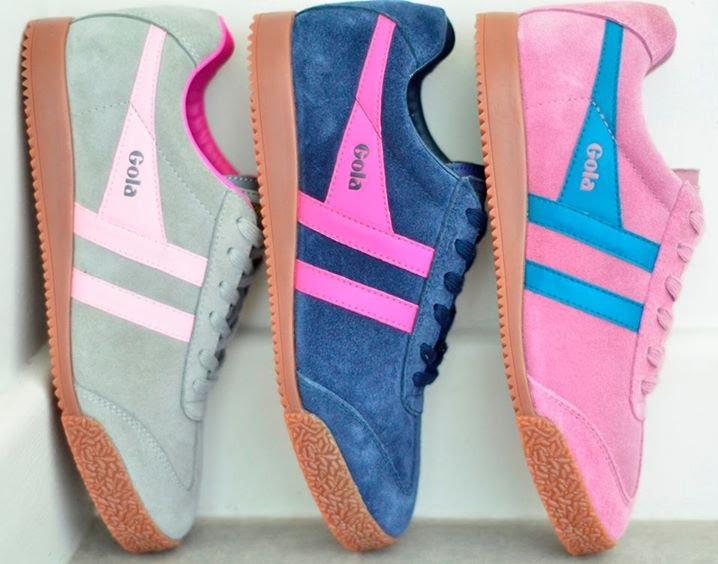 No matter what time of year it is, a splash of pink will always brighten up your day. You could say it is lucky then that right now on the Gola website, we have dozens of brilliant pink ladies’ shoes and bags which can help add some much needed colour to these cold and grey winter months.

There are plenty of pretty pinks to be found in several of our Harrier trainers, which were originally launched in 1968 and are part of our Gola Classics collection. Whether it is bright pinks against a dark navy suede like these Harrier trainers, or dark, warm pink with a navy wingflash like women’s Harriers, you can always count on pink to bring your Harriers to life.

Our next selection is an eclectic mix made up of three styles which are part of our Gola Classics range. These include black slip-ons with an elegant pink floral print, the 70s tennis classic Orchid in a bright shade of fuschia and last but not least the Gola x Liberty Art Fabrics Samurai which makes great use of one of Liberty’s intricate prints.

Finally, we bring you a trio of bright and bold Gola Classics Redford messenger bags. We have chosen a baby blue and pale pink Redford bags design, an allover pink and fuchsia Redford number and lastly a darker blue, pink and white take on our classic over-the-shoulder bag.

Don’t just take our word for it though, there are plenty more for you to browse and buy in the Gola online store!

The surface below the sea hosts enchanting worlds. Acting as a space for the unknown and the mysterious, the depths of the sea offers endless possibilities when it comes to exploration and the association with the unconscious part of our psyche.

Seemingly hostile to human presence, the underwater worlds are actually strongly influenced by human activity, hosting large quantities of forgotten artificial materials and objects. Forlane 6 is a duo project of two artists, Hortense Le Calvez and Mathieu Goussin,that intends to question and imagine how organic shapes cohabit when transformed and positioned in the context of a foreign space inaccessible to human life.

Objects are metamorphosed into artificial natures before being installed under the current of air or water, after which their buoyancy can be explored and re-imagined. Eerie and weirdly soothing and satisfying, the almost science fiction mise en scène is rendered effective through the contrast between fantastic worlds and familiar materials.

Forlane 6 Studio freezes aerial movements through photography and videos, blurring the edge between reality and fantasy. Referring to the post-human age and the frozen time frame of the deep sea, the Forlane 6 project gives an autonomous voice to the inanimate.

The man-made installations’ discourse mimics living creatures in a setting free from it, thus rendering the dichotomy between autonomous life and still life effective and challenging.

Mathieu and Hortense currently live and work on their forty years old sailing boat, Forlane 6, currently based in the Aegean Sea.