When it comes to art, paths cross in the strangest of ways – and there’s no better place to do it than in London. As Samuel Beckett once said: if you’re tired of London, you’re tired of life. Yet oftentimes, talent springs up from the turf closest to home. As a kid I went to an international school in Guangzhou, China… and so did aspiring fashion photographer Shannon Tao, now studying at London College of Fashion.

Born Canadian-Chinese and working in London, Shannon’s work is introspective and reflective. A dreamy, nostalgic quality exudes from her photos: her models pose, stilted yet languid, in fancy dress or nondescript clothing, against leafy backdrops or the clinical edge of a toilet. The slender youths gaze towards the viewer, slightly blurred as if a Gaussian filter has been cast over their frames. Pink, violet, sky blue: Shannon’s world is largely hued with sentimental pastels and framed in polaroid – impulse shots of an everyday banality. Like what you might capture of a friend or an “odd in-betweener” with a blink of an eyelid, they are translucent, ethereal and glaringly transient.

Already, Shannon is starting to make waves in the fashion world, her newest series Glitzy Daydreams having recently been featured on Canadian-English magazine Zeum Mag as well as a collaboration with blogger Jiro Hsu being featured on Elle China.

To see more of Shannon Tao’s photography, visit her website.

Sarah Kathleen Page is a talented artist from Peterborough, who I’m lucky enough to know personally.
We studied media production at college together from 2008, where her flair for fashion and photography was increasingly apparent; as since she has flourished, experimenting in several different mediums, including photography, film-making and modelling.
Between her passion projects and working as a photographer and editor for a clothing company, Sarah’s been a busy lady lately, but I managed to catch up with her for a quick chat about what makes her tick.
So, I’ve known you since we were younger, but what did you want to do when you were a kid?
Originally I wanted to be a fashion designer. I would watch Fashion TV and America’s Next Top Model, which lead to me being more interested in the visual photographic side rather than designing and styling.
Would you class yourself as a photographer, a filmmaker or an artist?
A bit of both. Sometimes I film, sometimes I photograph. Sometimes my work has a personal meaning, other times I want to create something just because I’m in a creative mood. The whole process for me is quite therapeutic. I have something to focus on besides my every day worries, it gives me a creative outlet and a way to connect with people.
Why did you want to go into this field?
Being creative and challenging myself is what I like to do. Work in this field is very varied, I like the idea of doing something different every day. Film and photography gives me this opportunity to create work that people will engage with, to make people connect with what they are watching and that will broaden our understanding of the world.

<divYou’ve been really busy lately, but what do you do in your spare time?

I travel a lot, usually down to London; there’s always something new happening. I’m keen to find new opportunities, so every once in a while I’ll be volunteering for festivals such as the East End Film Festival and London Festival of Photography and attending talks, such as with Elliot Grove founder of Raindance, Perry Curties editor of 125 magazine and David Bailey. When I’m not doing all this, I’m drinking tea and having cuddles with my beautiful cat Shebba.
What would you say is your biggest achievement?
Photographing the catwalk shows at London Fashion Weekend was a great experience; it was a bit of an adrenaline rush the first time. It was nice to get a taste of what it would be like as a career.
What should we expect from you in the future?
I’m hoping to have a photographic exhibition on the 17th of June at the Peterborough University. I’ve also been trying to make the big decision whether to go to University or not, which will have a big impact on my future.
You can see more examples of Sarah’s work at www.sarahkathleenpage.co.uk

At 18 years of age, most of us think of the world in A to B terms, which puts young photographer and model Amelia Le Brun way ahead of the pack. Born to British parents in Germany, Amelia has spent her life traipsing the globe; from Kuwait to Scotland, Jamaica to Dubai, hers has been an eclectic upbringing.

Now living in London studying for an arts degree, Amelia has had time to lay down some roots and travel the world around her- remaining the greatest source of inspiration.

A mix of candid headshots and street photography make up the bulk of her portfolio, but as a model, she also dabbles in constructed fashion shots.

Though photography is her prime medium, fashion is also a source of creative indulgence for Amelia. Her look is somewhat hectic, but far from being otherworldly, it as an aesthetic that is very natural and obviously a product of her creative personality and upbringing.

A professional career is on the horizon for this young artist, but for the moment she’s living and working for her craft. Inspiring stuff.

A selection of Amelia’s work can be found at ams-le-brun.tumblr.com – she can be contacted at mealz@hotmail.co.uk. 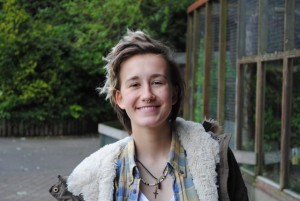