Folklore inspired illustrations made in a paper cut technique fascinate with detail and precision.

Michael Lomax is a freelance illustrator and designer, who graduated from the University of Wales in Graphic design and is now based in Nottingham. He specializes in paper cut illustration and being inspired by folklore, his portfolio contains a variety of  artworks illustrating well known fairy tale characters from his perspective. He has already created numerous works for magazines and publications and one of his recent projects- Hans Christian Andersen’s “The Most Incredible Thing” was featured in Creative Review’s 2011 Illustration Annual. 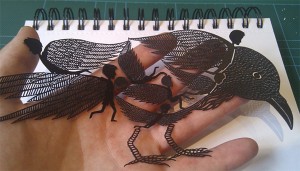 Some of the art pieces he made require cuts smaller than 1 mm in diameter which demonstrates his level of detailing and delicacy. It also shows the admirable level of perfection that can be achieved. 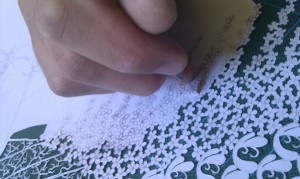 Michael experiments between a variety of expressions and methods. He compliments intricate paper cut illustrations with digital artworks, as his attention to detail can be easily transferred from physical to computer realms, achieving impressive results.

To find out more take a look at this website http://mjlomax.co.uk/ and his blog http://michaeljlomax.blogspot.co.uk/.