Since launching debut album ‘Young Chasers’ in 2015, Liverpudlian-born band, Circa Waves, has made an incredible impact on the music scene. From sell-out tours to performances at Glastonbury, the band has grown both lyrically and musically to become one of the most respected bands on the circuit.

Currently on a UK tour and enjoying massive success with newly-released second album ‘Different Creatures’, Gola caught up with Circa Waves’ guitarist, songwriter and lead singer, Kieran Shundall, to find out more about the roots, present and future of Circa Waves. 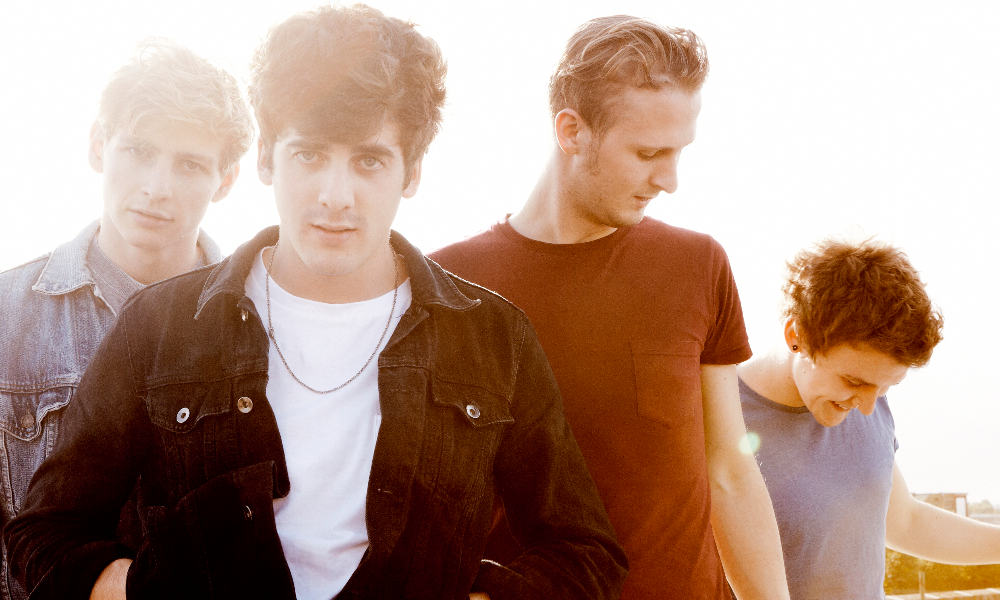 There’s a significant change in sound between ‘Different Creatures’ and your first record ‘Young Chasers’. It’s a bit grittier and your lyrics are about darker themes, like alcoholism and depression. Was this shift a conscious decision with this record or was it something that came naturally from growing as part of Circa Waves?

KS: It was just what came out naturally when I started writing in early 2016. Our first record was more about looking back, but the lyrics in ‘Different Creatures’ are very present. It all came out of its own accord, really.

You worked with Alan Moulder on this album, who is the producer that worked with The Smashing Pumpkins and My Bloody Valentine. These bands have quite a distinctively raw, distorted sound. Did you seek him out because you wanted that sound, was it something he just created organically, or was it a bit of both?

KS: A bit of both, really. Alan has made every legendary rock record and the great thing is that he has all the knowledge. If you want that specific sound, he’s usually got the pedal that did that sound.

I think we asked one time: “How do you get the snare sound from that record?” and he just texted Butch Vig and got whatever snare it was, whatever mic was used, and within two hours had them both there ready to go. He’s got such a wealth of knowledge and information to get what you need. He’s also really patient and able to reach inside an artist’s brain and pull out the best, which is great for us because we don’t speak fluent musical language.

It seems like you knew exactly how you wanted each instrument to sound in every song. When you were writing, did you have a clear idea of how you wanted the album to turn out?

KS: Yeah. A lot of the demos did sound quite similar to the end result you heard. I’ve got a meticulous ‘demo-ing’ obsession. I think it’s a good foundation to have for an artist to go into the studio and say: “Let’s just make this but do it better”. Obviously, Alan is very gifted at doing that.

As much as you seem to have a specific idea in mind with ‘Different Creatures’, it sounds completely natural and doesn’t come across as over-polished. For example, I noticed you chose to keep in a comment you make about someone texting you at the end of one of the songs on the album…

KS: That was actually all orchestrated! We did loads of fake overdubs.

Really?! So did Alan try to get the right mics for how you wanted that to come across?

KS: Nah, in all seriousness, it’s something that we’ve all always loved. Like when you listen to old Beatles records and you can hear them all talking to each other. As a listener, it sucks you in straight away, which is what you want. For me, I always remember being able to hear when the Arctic Monkeys click the distortion pedal off at the end of their first record.

It’s immersive, isn’t it? It takes you right into the studio.

KS: Yeah, you’re in the studio with them. I’ve always wanted that. No matter how big the production — and it’s big on some of these songs — I still want it to feel personal to everyone listening to us. 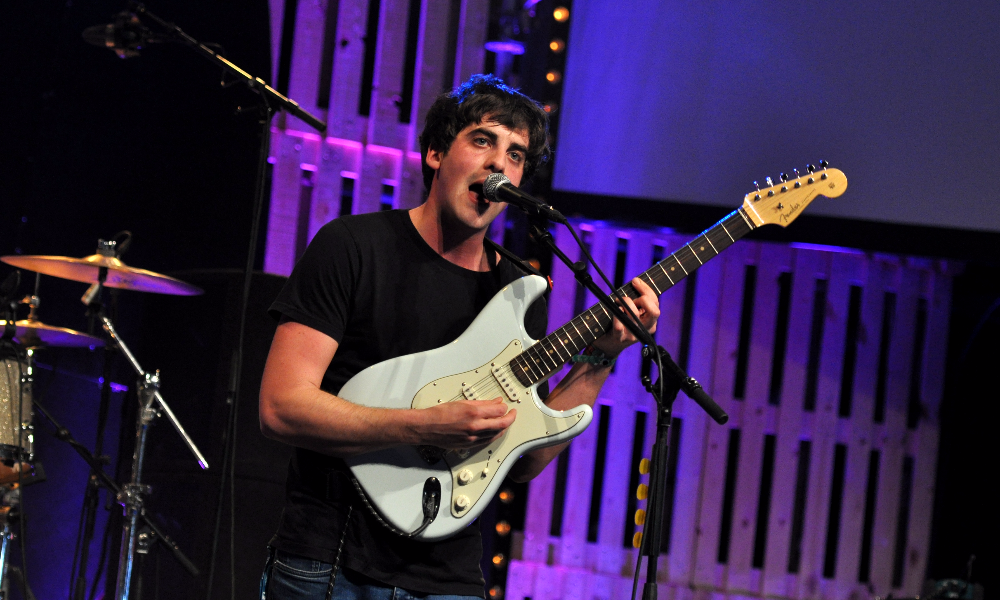 The album has been very successful so far. Do you feel you’ve now reached a place as a band, commercially or artistically, where you’re happy with where you are?

KS: No, I don’t think we’re content at all, really. We are really proud of what we have achieved and what we’ve done, but I don’t think we will ever think we have made it. Even when we’re headlining festivals, we’ll want to headline two festivals.

Any musician who is content should probably give up. You’ll stop making music that means something to you. We’ve got that drive and just want to keep moving up and up. We’re really happy with the album, but we want to keep pushing it as far as we can take it.

I think that takes a lot of confidence as a band. Is that how you feel?

KS: Yeah. I think when we first started we were just happy to actually be in a band. You get a record deal and take everything with a pinch of salt. You go: “Well, we’re just glad we’re here!”.

But over the last few years, we’ve seen the reactions that we’ve had and we’ve watched ourselves getting bigger and better. That alone makes you more confident. It’s hard not to be when you see 10,000 people singing your songs back to you! It’s such a massive boost. We want more of that.

It seems like Circa Waves is a band that has worked from the ground up. Do you think it’s harder, particularly as quite a working-class group, to take that path?

KS: I think we pride ourselves on being a live band that have toured continuously. Since we were all about 14 years old, we’ve been playing live and honing our craft, and we’re definitely happy to have made our name that way and not through some awful TV show.

We’ve played the toilet circuit (a network of small music venues that hosts rising rock, indie and metal bands) many times over to get to this point. Hopefully, people will see how we did it and it’ll inspire them to grow their own band that way and not look for the easy way into it. Unfortunately, there are a lot of people who think you just have to go on ‘The Voice’, or whatever, to make it.

But, is it hard to support yourself when you’re starting out and not seeing that kind of success?

KS: When we were first in bands, we all had jobs and would practice at night. With Circa Waves, we got signed really early which gives you a foundation of cash to live on. Not much, but enough to get by and just concentrate on being a band and making music. So, I don’t know, sometimes you’ve just got to put yourself out there and do it. 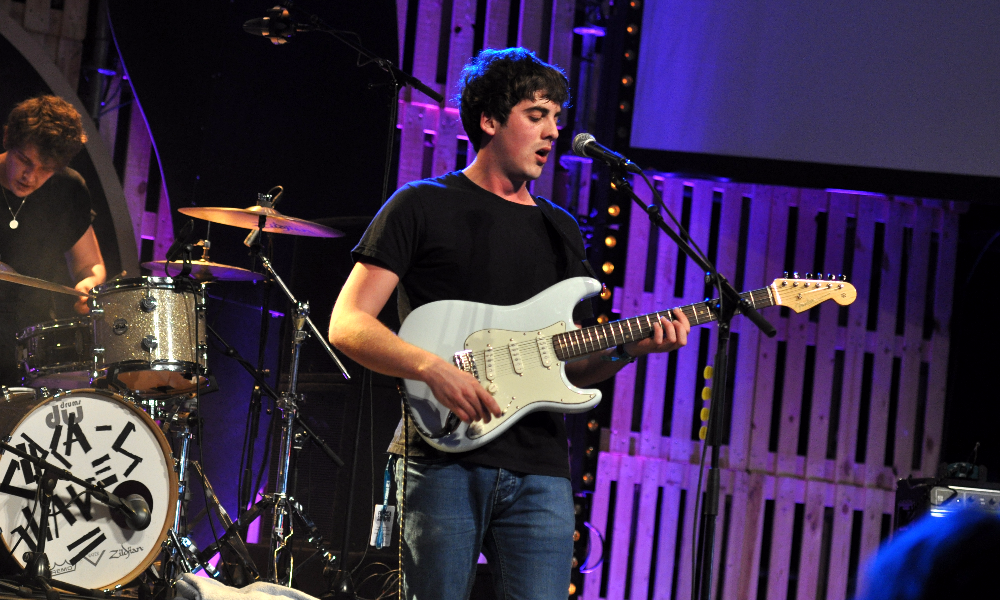 You said you pride yourself on being a live band, as it’s where you built character and honed your craft. Is there any particular way you approach performing live? Is it an entirely different performance or do you go out and play with the same energy and enthusiasm that you did in the studio?

KS: I suppose it is a bit of a performance. I don’t walk around the way I do on stage in real life. You have to have a bit of swagger when you’re in front of people.

Yeah, I’m sure Nick Cave doesn’t walk around on stage the way he does in real life, either. You are playing a bit of a role, aren’t you?

KS: It is a bit of a role. I think we are very aware of our fans and they’ve all paid £15 to come and see us, so we owe them that amount of entertainment. We do put everything into it and at the end of each gig, we’re sweating and our hands are bleeding. I don’t know any other bands at the moment who are as active as us in our genre. We do absolutely give it everything.

Are there any other bands right now that inspire you?

KS: The Vryll Society. They’re really cool, sort of like early The Verve. I’ve always loved the singer, Mike Ellis. He’s such a confident guy and actually reminds me of a young Mick Jagger. He’s a brilliant songwriter, too, so I’m really intrigued to see what he does next. I also heard Zuzu on Huw Stephens recently, who’s really cool, and Clean Cut Kid are doing well at the moment, I think.

Do you put much thought into your fashion when you’re on stage? Is there an image you aspire to when you’re performing?

KS: Elvis. We all try to be Elvis… As a band, we try to put a bit of effort into our look but we don’t wear guy-liner. Yet.

So, when you talked about ambition, you meant glam rock?

That could be the next stage for Circa Waves.

KS: That’s the next level.

Circa Waves are made up of bandmates Kieran Shudall, Sam Rourke, Colin Jones, and Joe Falconer. The boys are currently touring across the UK, supported by INHEAVEN and The Magic Gang, and their latest album is available to buy now.