I’m a Fine Art Student at Chelsea College of Art and internet-idealist making quiet installations and the odd performance. Work involves finding, small texts and every text my parents ever sent me. It feels soft, looks calm and tastes like mashed potato. I like net art and spacey music. I've been trying really hard to be good at rollerblading.

An artist and writer well known for her work which explores culture and trends in our following of celebrity and online communities, Rosemary Kirton writes in an effortless and critical manner via her blog Grossmary!

Titles of Rosemary’s texts include such gems as ‘Follow for More: Screenshots of Soft Culture.’ and ‘BRAND STINKIN NU’ creating her own musings on pop culture such as the character of the ‘Uncanny Valley Girl‘ a combination of the theory of the Uncanny Valley and the stereotype of the Valley Girl to create a figure who she defines as ‘girls who have developed their image/identity/personal brand to extremes of perfection at the cost of much anything else’ describing the point at which people manage to make themselves so unreally wonderful that they become vapid and distant.

Pictured are stills from Rosemary’s film ‘Follow for more soft Grunge’ which is captioned ‘Formal files and styles of performance being softened and corrupted.’ as if to talk about a sense of performativity that pervades every part of our life on an almost molecular level, as if soft grunge and other similar viral-feeling online trends compute some kind of physical take over.

Be sure to keep up with Rosemary’s work online.

Ayesha Tan-Jones is a student at Central Saint Martins and an installation and video artist who makes music as Brownie Promise. I have only ever been a spectator online but to me, her work (and whole online presence) acts like an invitation into her distinct own brand of the psychedelic, it is a wonderland and functions like a treasure trove. Ayesha seems to drift effortlessly through mediums in her music, gently reflecting the tenor of her cystaline and pretty bodily installation. The video work feels like it threads everything together into a totally multi-sensory experience which becomes almost other worldly!

Of course the best person to collaborate with is another version of yourself!

Ayesha uses her alter-ego Una X Jynx like another voice through which to make work, we see them video chatting and interacting online where they plan to make collaborative hypnosis videos and collaborations like software upd8 // version 2.∞ // STEP 1. For me their work function feels like two girls coming together over the web to voyage through it as a mystical entity, as if together they can begin to understand it.

Ayesha can be found onilne via her visual journal and website and specific art blog and Una at her very own website here.

I’ve had a definite soft spot for Kagoule’s swirly churning since seeing them a few times a couple of years ago in Nottingham and more recently in London with Drenge. These guys are seriously exciting, sickeningly young and overwhelmingly talented.

Cai’s gloomy-cool and Lucy’s urgent throbbing on bass makes me want to wear my clumpiest school shoes again. Sometimes calm… often brooding…and all round achingly nostalgic, I can’t do them justice by cobbling adjectives together.

Maybe a mood-board demonstration, consisting of tattered velcro-fastened coin purses, after-rain walks home, braces and biro battered lined papers would be more apt but it would only go some of the way. Listen, Kagoule are anything but clumsy!

Kagoule just released a single called ‘Adjust the Way’ on Hate Hate Hate Records along with their first (suitably dark and fuzzing) video. Watch it online here, maybe make an afternoon of it.

Of course you can find Kagoule on Facebook and they are setting out on their first tour in December, playing all over the UK with Cold Crows Dead so you must keep a look (or ear) out! 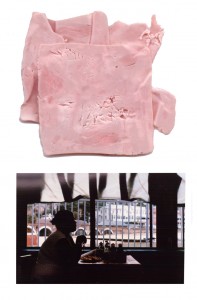 Adam Black is a happy-go-lucky 18-year-old, just starting art school but already reaching notoriety for his enlivening bold and poppy work which as featured on t-shirts he has designed, gig posters and much more! Definitely reminiscent of the Cape Town sunshine he grew up in and now Nottingham based, his work touches upon the clear political and socio-economic undercurrents in both the South African and the UK landscapes.

Think: ‘Whut!?’ ‘Arms’, ‘Life’ to name a few slogan-like texts which lie sprawled, in funky letters across drawings, paintings and increasingly digital and collage work. It is hard not to like. Like, it is hard not to like this scanned piece of ham. Adam works very quickly and points out various family members painted in his recognisable but perhaps unflattering style, seemingly always armed with drawing materials! Paintings are light hearted and slightly satyrical and the film photographs very sincere and documentary-like, collage work perhaps playing lightly between the two.

(All images copyright to Adam Black)

I was sort of surprised to be messaged online by a girl asking me to send her my knickers but i’d seen Charlotte Cullen’s work online and it transpired she was creating an exciting exhibition and  index of artists via their pants. The catalogue would be a direct reference to the conventions of documenting and selling art and a comment on the exchange value of objects and labour involved, the provenance of the artwork (the artist) drastically increasing the selling value of otherwise indistinguishable objects. A Banksy becomes almost unrecognizable from a reproduction yet the value skyrockets when it holds his name creating a similarly ‘capitalist commodity’. Charlotte looks at other artifacts that the ‘artist’ produces and questions their value like an artwork and fluctuating status from bi-product to commodity.

The net sets this economy on an accessible stage and Charlotte asks how our virtual culture relates physical and online interactions and how this ‘material construct’ functions as a ‘material becoming’.

As Gal wrote in the press release ‘A pair of used panties in need of a wash is in its material sense useless. With the same perspective you could argue that when the painting is dry, the plaster is rock hard or the film exposed, it is no longer usable and should therefore have the purchase value less than its raw materials put together.’

I saw the show come into its own physical being at Arvida Bystrom and Hanna Antonsson’s aptly named and pink-floored gallery- ‘Gal’ in East London. I hung around (on top of a ladder) to help set up the show which opened in the evening…in pink light, vacuum-packed underwear hanging delicately from the ceiling, anchored down by rocks from outside. A large print by Hannah Regel was included along with small, intimate photographs by Arvida herself (pictures), and others like Vanessa Omoregie as well as two film pieces by Maija Elizabeth Ekey.
See more of the Intimates Index and check out Charlotte Cullen’s practice online here.
Photographs copyright to Arvida Bystrom of Gal.

Caitlin Hazell is a wonderful illustrator who regularly contributes work to the well known teen magazine, Rookie. This perhaps sets the tone for her illustrations which employ pop culture and personal narratives to create a sensitive voyage through teenage life.

Caitlin’s own journey is documented though her blog which runs much like one of her moleskins, filled to the brim with scrawling snippets and scenes. As her Rookie biography states, she ‘enjoys looking out for the small things in life people usually miss’ and I think this goes a long way to describe her work which acts like a very sincere spectatorship on the big bad world.

dumb stuff is the name of Caitlin’s bigcartel site where she sells sticker sets and her past 6 Zines which appear like diaries or journals – completely covered in text and felt-tip. One of my favourite illustrations of Caitlin’s reads ‘Don’t worry Mr Sheep – i’ll come back later and get you out (child talking to Damien Hirst’s ‘Away from the flock’)’ and for me her work goes some way to create a breathing space or at least something lighthearted and fun. It is really easy to fall in love with!

You can see Caitlin’s work online at Rookie, as part of Bunny Collective and here.

She is fiercely productive so definitely one to follow!

89plus marathon was a weekned of talks, poetry readings and performance celebrating new young talent, DIS Magazine’s ‘diamond generation’. The much anticipated winners of 2 new grants from the competition DIScrit 89plus were announced- the impeccably dressed and moustached Niko the Ikon and his partner in crime Tierney Finster. They appear to be long-term collaborators and best friends forever. Niko warns us not to be distracted by his moves as the screen their sultry interpretation of pop hit ‘Can we talk?’ by Tevin Camplell, released in 1993 which they explain was filmed on the same camera that recorded Niko’s birth. The new space-agey and sparkling Serpentine Sackler Gallery seems the perfect setting for discussion which centered mostly around new media and art in the internet age, all with reference to 1989 as a the crux.

Niko and Tierney were more than charismatic in explaining that their ‘greatest creation together was ourselves, our favourite media is social and favourite characters are online, mostly ourselves’. But their work has a depth and sincerity that makes it enchanting, Tierney adds ‘we are examining others when we publicize ourselves’ and ‘our videos are about love’. As sweet as they are cool and sophisticated, Niko and Tierney seem like the hot new art talent this year.

Check out their video here: http://www.youtube.com/watch?v=uhoaadQFdrM.

Mimi Winsor graduated from Chelsea after what was a marathon show of twice-daily performances of her piece ‘Squeeze, pinch, stretch, roll, dollop and extrude’. The work consisted of large welded-iron structures which made up a sort of playdough sausage factory. White-clad and hatted factory workers kneaded, slapped and heaved 1 tonne of dough through Mimi’s contraptions over the course of the show. It twirled, plopped and mashed through machines in an often hilarious manner before the workers rushed it to the ‘extruder’ where it was finally processed, forming long pink sausages.

It looks like hard work and results in an ambitious, sensory and playful performance-piece which, rather than being simply sculptural, actually churns out art itself! Sculptures/sausages were for sale per lb.- a tickling nod towards the tricky conventions of selling degree show work. This constant, haphazard growth ended in a sea of extruded dough, the workers struggling, everything pink and mushy.

After completing various exciting builds such as a gigantic sea anemone for the Discovery Channel HQ, Mimi’s degree show also won her a commission on the giant Rootstein Hopkins Parade Ground at Chelsea. In similarly dramatic style, she is creating a prison complete with prisoners to function in the open square. The piece called ‘Grinding the Wind’ references the history of the site which used to house MiIlbank Prison and involves Mimi’s own ‘correctional labour device’, inspired by the victorian Treadwheel Fan. The prisoners will operate the contraption in performances that nod to not only the ideas of process in art but also often absurd and pointless labour.

Catch a performance outside Chelsea (next to Tate Britain) from Thursday 17th October to Sunday 3rd November with performances on Tuesdays, Thursdays, Saturdays and Sundays at 11:30am and 2pm. Rootstein Hopkins Parade Ground, Chelsea College of Art and Design, SW1P 4JU.